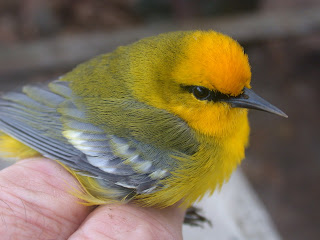 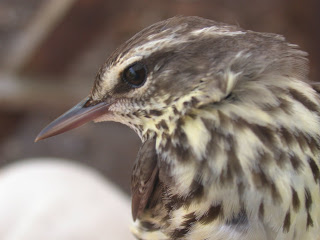 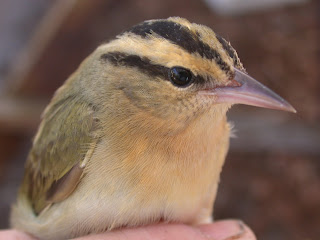 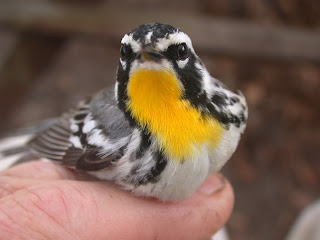 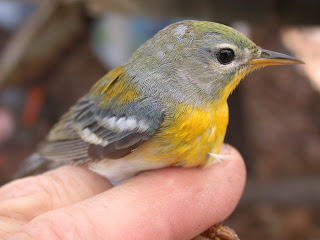 While April has brought a number of warblers to our nets, including the Blue-winged Warbler, Northern Waterthrush, Yellow-throated Warbler and Northern Parula pictured above, the number of individuals netted in April has been profoundly disappointing. Only the 29th of April brought more than twenty new birds. A majority of days has brought fewer than seven birds to the station nets. Each neotropical migrant which has visited the station over the past six seasons in annual numbers greater than ten is well below that threshold. Kinglet, gnatcatcher and Hermit Thrush numbers, too, are at all-time lows and unlikely to improve in May. Today brought us only four new birds; not a good start to the final month of the season.
Posted by Peter Doherty at 8:36 PM No comments: 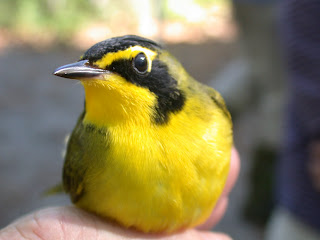 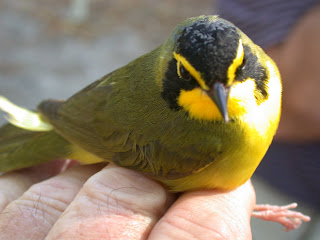 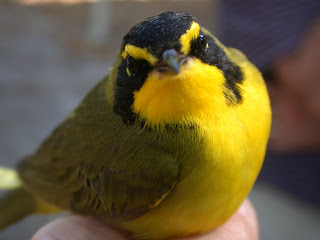 April 29th, the day following deadly tornadoes across the Deep South and strong storms in eastern North Carolina and Virginia Beach, brought a Kentucky Warbler to the station for the first time. The bird was extracted by eleven-year old Mary Michael Lipford with great skill and without assistance. The warbler was a handsome after-second-year male.
Posted by Peter Doherty at 8:23 PM No comments:

A Third New Species for the Station in 2011 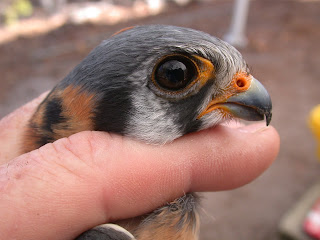 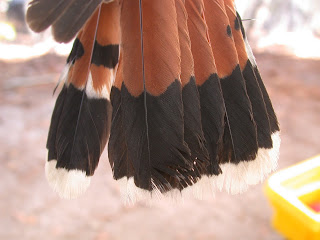 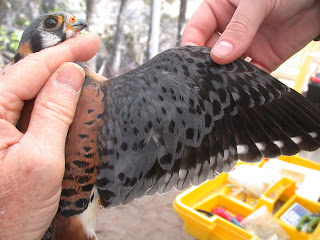 On April 7th an American Kestrel magically appeared in net "C5" in the late morning. I had not previously seen a Kestrel in First Landing State Park and other birders have since confirmed that the Kestrel, while common to the Eastern Shore of Virginia landscape, is rare within the Park. This individual is a second-year male and is the 114th species banded at the station.
Posted by Peter Doherty at 9:07 PM 1 comment: 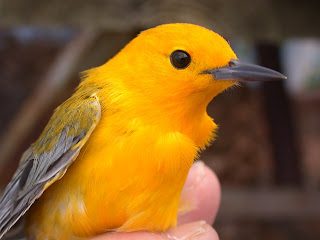 Two, stunning, male Prothonotary Warblers were banded in the past week. The first bird was marked on April 7th and the second was netted today, the 12th. Whole blood was taken from each bird to compare with that of the Prothonotarys captured and bled last January on their wintering grounds in Panama City, Panama in conjunction with a VCU project. The plumage of each male was brilliant.
Posted by Peter Doherty at 8:42 PM No comments: 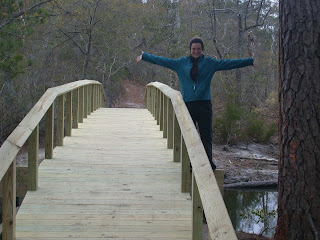 CVWO 2011 field assistant, Kimberley Pasterik, is very pleased that the bridge across the tidal creek to White Hill Lake is about finished. Access to our group of "C" nets is much improved. More about Kim's background soon.
Posted by Peter Doherty at 8:38 PM No comments: 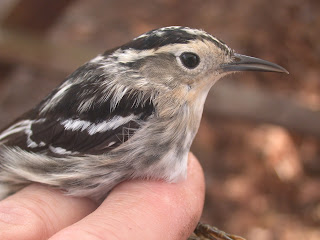 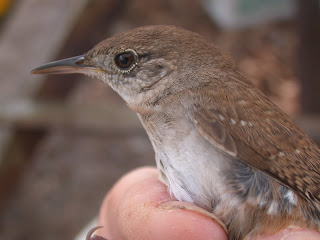 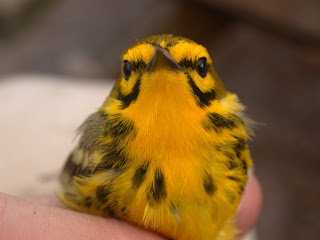 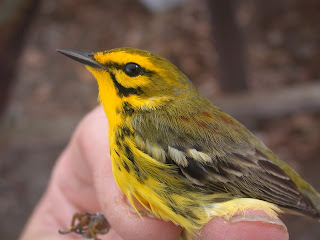 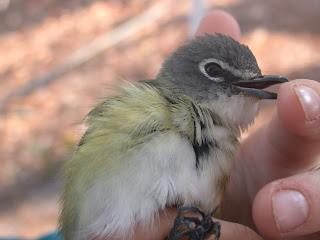 Early April has brought a steady trickle of new-for-the-year migrants. The female Black and White Warbler arrived today. One or two Prairie Warblers have been marked each time the temperature perks up. The Blue-headed Vireo made its annual visit a bit later than usual. And the House Wren completed our first ever "wren sweep" in a season--Carolina, Marsh, Sedge and House!
Posted by Peter Doherty at 8:07 PM No comments: 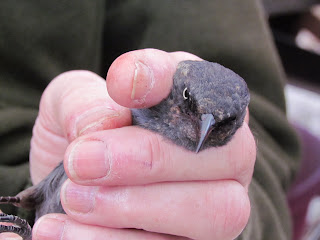 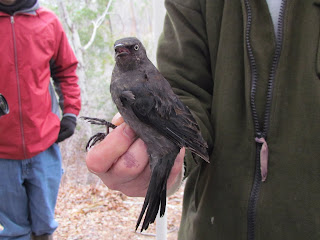 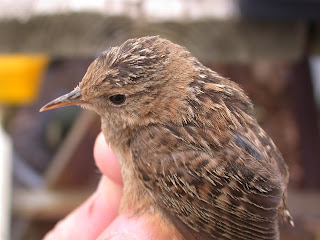 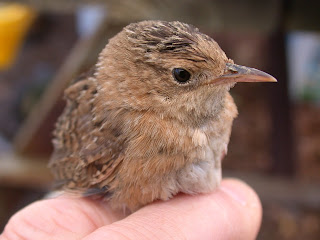 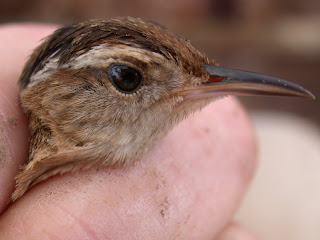 On consecutive banding days in late March, two new species were added to the list of birds marked at the First Landing Station. The First Landing species total now stands at 113.

A female Rusty Blackbird appeared late in the morning of the first CVWO bander training weekend in one of the wetland edge nets often frequented by Red-winged Blackbirds and Common Grackles. Rusty Blackbirds are in a steep decline in North America. Read about the Rusty here: http://nationalzoo.si.edu/scbi/migratorybirds/research/rusty_blackbird/default.cfm

After a rain day, one of my favorite birds (and one rarely seen well by observers outside of the breeding season)appeared in one of our "roving" salt marsh nets. When I was much younger, the little bird (8 grams, this one) was called the Short-billed Marsh Wren. Now it is simply known as the Sedge Wren. The slightly larger wren pictured at the bottom above, now known as the Marsh Wren, was formerly the Long-billed Marsh Wren. What an appropriate description! But having the Sedge in the hand allowed me to "absolutely" separate Sedge from Marsh Wren: the length of the exposed culmen of the Sedge (length of upper mandible from the tip to the first feathers at the base of the bill) is less than the length of the middle toe, not including the claw!! Now who figured that out? One of the benefits of the shotgun era of ornithology? The exposed culmen of the Marsh is, of course, greater than the length of the toe! The Sedge Wren is distinguished from the Winter Wren by its lighter, overall appearance.

Which will be the next, new First Landing species? Oh, yes, the prior mystery birds? Song Sparrow and Swamp Sparrow.
Posted by Peter Doherty at 5:41 PM 2 comments: